I'm always amazed at how talented The members of  SJWG really are. Every single member brings some sort of a specialty, which they're willing to share with the group. John Farquhar is one of those amazing people. John's specialty is humor and his stories are a joy to read. John has a gift of seeing life in general and human foibles in particular through unfiltered glasses. I've read some of the manuscript before it was published. I won't be one bit surprised if this book to becomes a movie; it's that good! John is also published in the Tall Tales and Short Stories from South Jersey Anthology.

John, thank you for being a guest on our blog. I can't wait to read the book. Tell us a little bit about yourself. 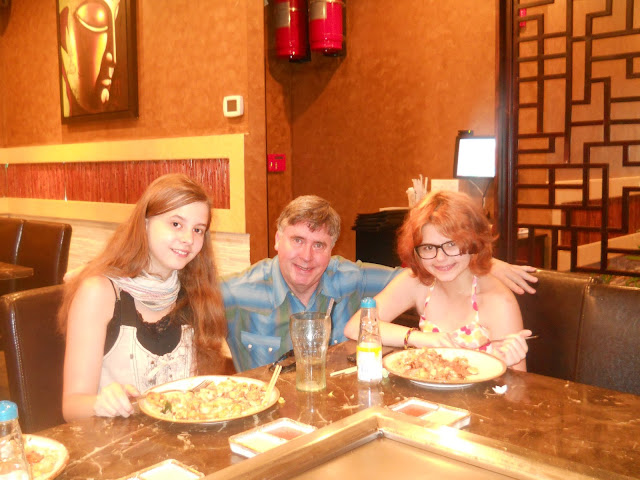 John Farquhar with his daughters


Myself:  I was born in England, of Irish parents, and educated at Liverpool University and St. John’s College, Oxford. I first came to the USA 17 years ago, to get married to a Jersey girl. We have 2 wonderful daughters, Gemma (15) and Kate (13). I teach literature and languages at Rutgers and Temple University. My passion is World Literature, the older the better.  I find I can relate more to texts that are 4,000 years old than I can to recent masterpieces which, I suspect, won’t be masterpieces for very long.  I am not trying to be ‘an angry old man’. I have the utmost respect, and love,  for writers, but I suspect the novel as we know it may well have run its course, because it is a long time since I have read a novel that I would call a masterpiece.  There seems to be an unnecessary emphasis at the moment on the very violent, the very personal, the whimsical and the animated, in the bad sense of that word, but the refusal of so many writers to engage in important questions of the time, and the embarrassment most seem to feel at the old classical ideal of ‘entertain and instruct’ seems to me to be a dead end.

Book: My book has two very simple aims: to make people laugh and think.  Though the title might seem morbid to some, to me the tone is unrelentingly cheerful and warm-hearted, and I hope this is how it is read.  I am not trying to antagonize anyone, or to get any believers so angry as to burn my book, though that would be excellent publicity.  The simple question I am asking is why so many believers are so uneasy when humor is used in relation to the search for God.  Are we to assume that God does not understand irony, or does not appreciate it, or feels it should be banned?  The serious tone of so much religious debate is, in my opinion, more a reflection of unresolved fear than unconditional love. Theologians, of whatever persuasion, sometimes seem to me to be engaged in a sustained campaign to remove humor from the face of the Earth, and there should be periodic attempts to stop them, because it is precisely when we lose that ability to laugh at ourselves that we tend to start killing each other. 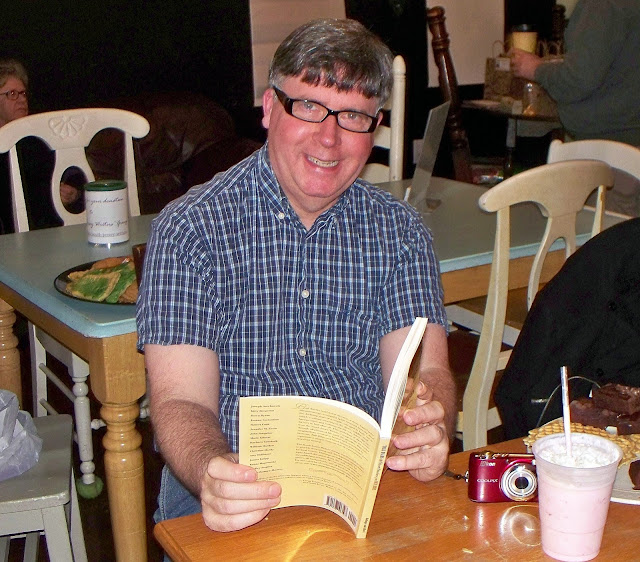 John Farquhar holding the anthology that has one of his stories

Afterlife:  It should be obvious, when you read the book, that, unlike the narrator, I am a skeptic, as indeed I always have been. My hero, growing up as a Catholic, was Thomas the Doubter, and I can still clearly remember how, aged seven, I couldn’t understand why my teachers were portraying Thomas as the bad guy for wanting proof that Christ had returned from the dead. They were the ones, after all, who demanded proof that a dog had eaten my homework.  Whatever faith is, it is not blindly believing everything you are told; there must be some basis to faith, and, unless you have put it to the severest of tests, you can’t really call it faith at all. Given what appears to be a sharp decline in the membership of organized religions, my position is, I suspect, much more common in America than is generally admitted: I don’t have faith in the existence of God, but nor do I have faith in his non-existence. This no-man’s land, to me, is funny, and this is what compels me so often to write about death and failed attempts to find God. The reader, in this book, is taken, by a well-meaning, but possibly nutty narrator, on a journey to meet God, and beyond; if you laugh at his revelations of how we fit into the Eternal, you should ask yourself why you have laughed; if the journey annoys you, or seems irreverent, you should ask yourself how you personally think Eternity will shape up,  how you envisage yourself as a Spirit.


Publisher:  I am in awe at the sheer energy and fearlessness of the most remarkable multi-tasker I know, Amy Hollinger, of Hypothetical Press. Without Amy, this book would certainly not have seen the light of day. I’ve no idea, of course, what  fate my work can expect , but, if this little  book  ever gets known even locally, I often think with glee of Amy walking the streets of Audubon, and people pointing at her, saying: “that’s her! She’s the one!”

Can we expect to see a sequel to What to Expect?


Sequel:  I take you, the reader, from your death, through the tunnel, across the Astral Plain, to the Astral Dome, through an interview with God, into apparently endless darkness, to an unexpectedly happy and eternal finale. How the hell can there be a sequel?

Thank you John for being my guest. And, for our followers, John's book should be out soon. I'll be promoting the Book Launch on this very site. Read the Book; be prepared :)
Posted by Marie Gilbert at 11:08 AM 1 comment:

A Day On the Greene 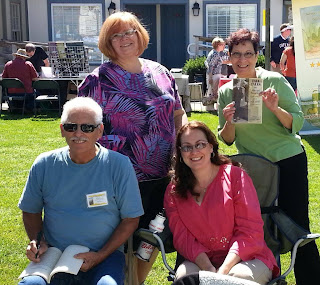 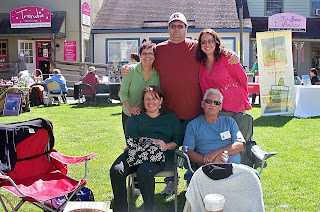 SJWG Authors Janice M. Wilson (seated) and James Knipp (standing)
Super G and Super D along with fellow members of the South Jersey Writers Group had a wonderful day at the beautiful and historic town of Smithville, N.J. on the Village Greene. 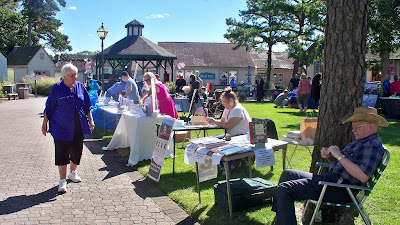 We were part of the Authors on the Greene that was hosted by Wendy Birkbeck of Through the Looking Glass Tea Shop. She did a wonderful job of pulling this event together. We sold lots of books and made many new friends, like the lovely ladies from Eight Women Writers 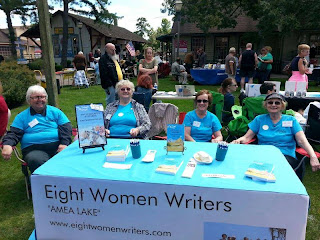 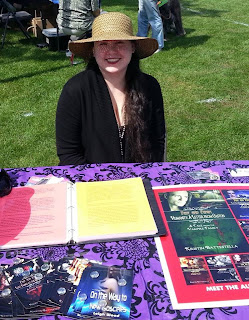 our very own Nanci Rainey 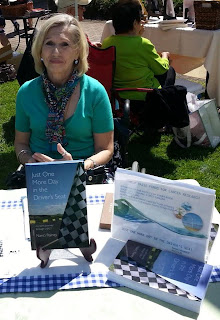 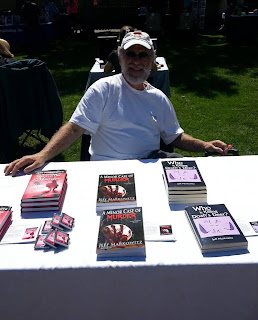 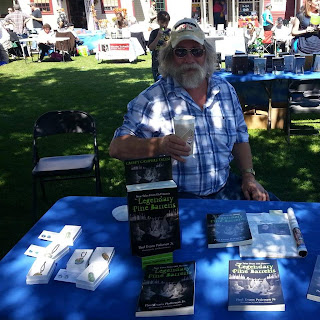 There were vendors, specialty shops, food, and...ghosts. Hey! Sometimes, the ghosts come looking for me. Ghost hunter and author, Richard J. Kimmel, and I spent some time talking about two of the buildings on the Greene that definitely were haunted. 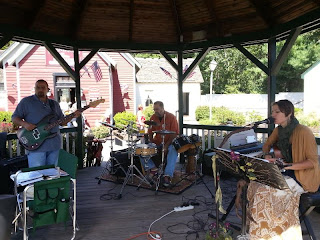 The weather was just right and the music kept everyone on the upbeat.


We even had a wedding take place during the Authors event. The lovely bride and groom were nice enough to pose outside of the bed and breakfast where they’ll be spending their wedding night. Congrats to both lovely people. 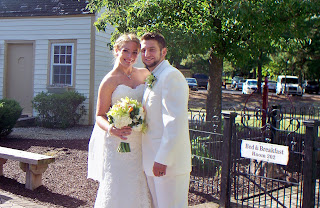 I think our writer’s group will be growing larger because a lot of people at the event wanted information. We’ll be taking applications this October. 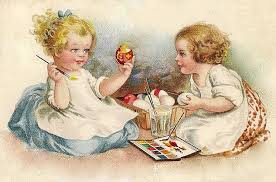 So, the dynamic duo of Super G and Super D are at it again. We're off on another adventure. Where are we going, you might ask? 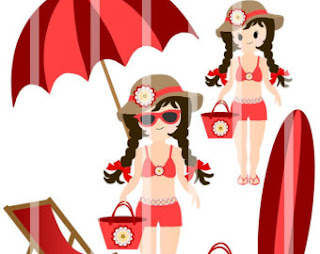 Dawn and I are heading down the shore to the beautiful, historic, and quaint town of  Smithville. Yes, we'll be selling our anthology of 2012 and promoting the upcoming anthology of 2014. There will be lots of venders there, and let's not forget the shops. 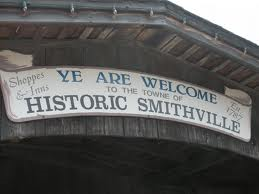 Come down, visit our table, and say hello. You'll find us along the Village Greene. Dawn and I, along with other authors from Tall Tales and Short Stories from South Jersey will be happy to tell you all about the South Jersey Writers Group and maybe you'll become a member. 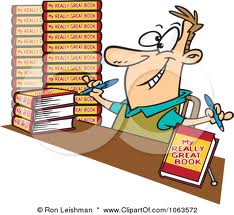 This is a big event and a perfect way to enter the fall season. So mark this down on your calendar:

https://www.facebook.com/AuthorsOnTheGreene
Posted by Marie Gilbert at 7:59 AM No comments: