Super D (Dawn Byrne) and Super G (Marie Gilbert) are back and ready to rumble.

Read this message to the tune of "When You're A Jet" from West Side Story. Why not make it interesting, right? 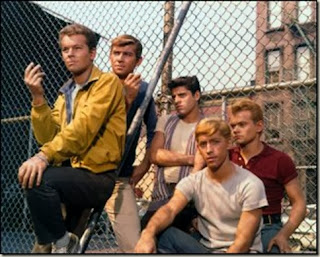 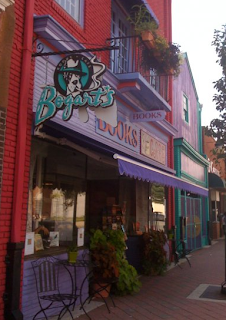 We are doing a book signing this Saturday, November 2nd at Bogart's Books & Café, which is located at 210 North High Street, Millville, NJ 08052 from 10:30 to 2:00 PM. If you need directions, click here, and don't forget to Like them on Facebook.

Stop by and chat with Dawn Byrne, Marie Gilbert and other members of the South Jersey Writers' Group, and buy a book. We can sing the rest of the song together... or... maybe not…

If you're not able to make this event, no problem, we will also be at the Maple Shade Library on November 13th from 6:30 to 8 PM. And there will be an Open Mike as well, where our authors will read some of their stories and we'll be selling our book, Tall Tales and Short Stories from South Jersey.

We'll be looking forward to seeing you there! 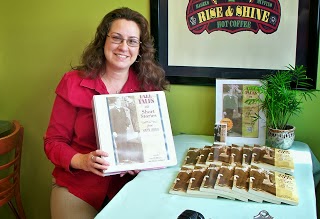 =========
P.S. from Glenn: If you'd like to know what's on the schedule for the South Jersey Writers' Group, please feel free to stop by our website, and the calendar of events there.

Also, if you're a writer in the South Jersey area looking for support, camaraderie, and most of all, information about the craft and the business, the South Jersey Writers' Group is open to new memberships through the end of the year.

Details on membership and all the gatherings, workshops, and events that the group provides can be found on our website. Hope to see you soon! 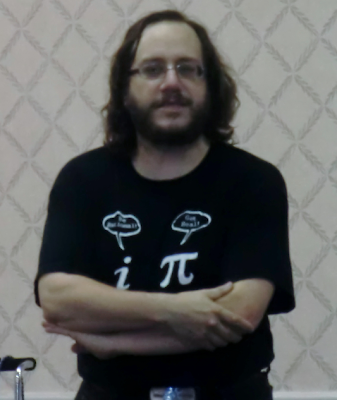 "This crap is hard."

That’s the tough truth that guest speaker Keith R.A. DeCandido opened with at the October 2013 SJWG meeting - The Business of Writing and Publishing - in Bellmawr on Thursday night. Wearing an "ironic" black tee under a NY Yankees Hawaiian-inspired shirt, the Bronx-born author of more than fifty novels reiterated what we’ve heard many times at writing conferences and from people in the industry.

Writing? Getting published? Self-Publishing? Yeah, all difficult stuff, he said, requiring a lot of work and discipline. In 1999, only after he’d successfully published four novels, was he "allowed" to pitch his Star Trek tie-in novels to an interested party. He’s since fifteen Trek novels, not to mention a ton of short stories and comics and stuff, he told the large, appreciative crowd who came to listen and learn. Many new members - and some of the usual suspects - took notes and listened intently. He is what we aspire to be, after all: a successful author.

Still, he gets rejected all the time. "One acceptance is just that; one," he said. Getting published does not automatically open the door for your next one. No matter what success you’ve had, you still have to work your ass off. Being a freelance writer means you must constantly be thinking, keeping up with things, and understand tax structure! 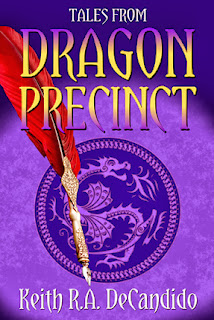 "If you treat it like a hobby, that’s all it’s ever going to be. Want it as a profession? Treat it like a job." He still gets the same thrill, he said, after fifty novels as he did when he saw his name on the cover of his first book in 1996. Although he has gone the "small press route" a couple of times, he says that writers should try to sell to the New York houses because we have nothing to lose.

DeCandido, who’s also a member of the Liar’s Club, said self-publishing is not for him because he doesn’t have time to market and promote his books. "I’m too busy writing," he said.

"To self-publish, you have to become the sole proprietor of a small business; that’s a full-time job and you have to treat it like that. So many writers don’t realize that going in." If you do choose to self-publish, he added, take care with the cover.

"The truth is that everybody judges a book by its cover!" he said, suggesting that writers work with graphic artists. When asked how publishing contracts work, he said that they’re all different. "In fact, the answer to nearly every question about publishing is: it depends." 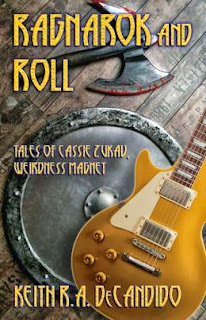 "If we knew what was gonna be successful, we’d all be much richer right now." DeCandido went on to say that it’s better to get rejected by someone who’s not enthused by your book than to be accepted by them. "Editors have to work for you, be seriously behind your book, get it in front of the publisher’s eye." The good news for us is that he said publishers look for new writers because we’re 'cheap' and 'get paid the smallest advances possible.'

Still. JK Rowling was once an unknown. The Help was only accepted after more than 100 submissions; now that was a relentless writer who believed in her story! Publishers will not, however, be interested in a book that’s already been published online or through self-publishing. But that is just one of many reasons your book may not make it to the show.

A publishing house may already have too many books like yours. Or, maybe they think their sales force won’t be able to sell it. Yes, it’s tough to write; it’s tough to market and promote yourself; it’s tough to get published. Still, we do it and hope for the best. His suggestions:

FINISH WHAT YOU START

"The ratio is like six-gazillion to one - novels started to novels finished. Don’t worry about going back to rewrite all the time; forge ahead and finish the damn thing. It’s like your mother told you: if you keep picking at it, it’ll never heal. Get to the end; fix chapter four later."

READ YOUR STUFF OUT LOUD

You’ll hear the repetitions, the word you used five times in the first two sentences.

FIND YOUR OWN PROCESS

"It’s up to you when and how you work. Make your work place free from distractions like the internet. I listen to music, some people like it silent. Whatever works for you is what’s right." 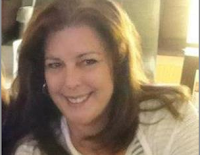 About today's guest blogger:
South Jersey Writers' Group member Patti O'Brien is an award-winning writer and editor extraordinaire. Be sure to check out her excellent editing service Editing Is Everything, Follow her on Twitter, find her on LinkedIn and Facebook, and read her always entertaining blog, A Broad Abroad.

On Saturday, The South Jersey Writers’ Group participated in the Collingswood Book Festival.  This was the Book Festival’s 11th year and each year it gets bigger and better.  One of the things that made it better this year, was that the SJWG’s had a table. 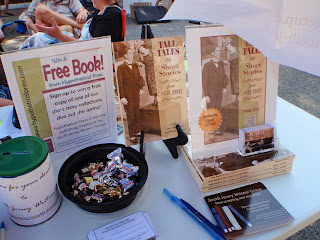 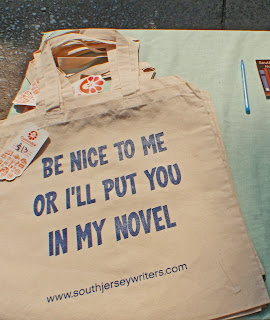 Our table had a great location, and a very nice tent to shade group members from the sweltering sun.  Although it was October, it felt more like August. The heat seemed to make everyone feel a little less energetic. 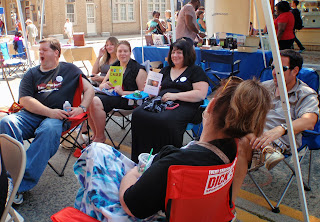 The group worked hard selling books.  Tall Tales and Short Stories was for sale and other group members had some table space to sell their books. 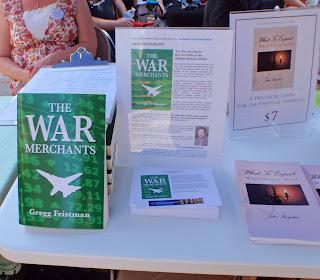 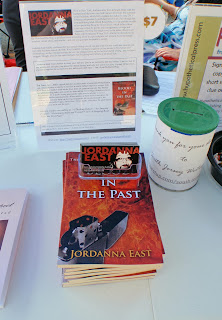 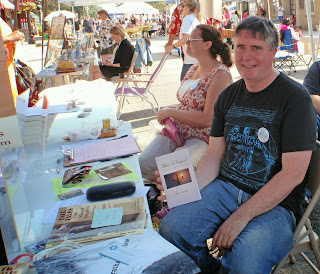 Jordanna East (Blood in the Past), Gregg Feistman (The War Merchants) and John Farquhar ( What to Expect When You're Dead) all sold copies of their books.


SJWG also worked at promoting the group.  Amy came up with the idea for these great pins.
They worked because people did in fact ask us about our writers’ group and we were ready to hand out our nifty postcards out to anyone who asked.
Amy and I also attended a panel called, What’s the Buzz in YA Fiction-Fantasy or Realism?  The authors on this panel were

The authors on this panel were quite encouraging about writing the story that you want to write and not worrying too much about whether or not your story is hitting on a particular trend (examples- vampires, zombies,  wizards, etc..).  By the time you are finished writing and revising your novel, the trends may have changed. 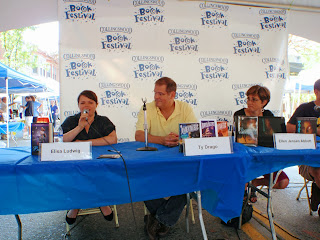 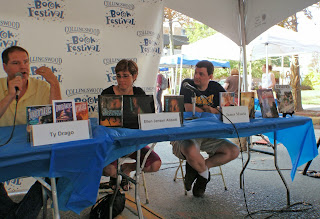