I’m a bit obsessed with travel. I spend my days in my drab cubicle, listening to travel podcasts. I check Instagram multiple times a day, just to see pictures of travelers around the world, and I read a lot of travel books.

For me, a great travel book has just the right balance of humor, philosophy, and heart warm. It should make me want to put it down at least once to check Google Flights to see how much it would cost to fly to the destination (s) discussed. A good travel book should inspire wanderlust.

The first travel book I read in 2016 was Peter N. Milligan’s Bulls Before Breakfast. 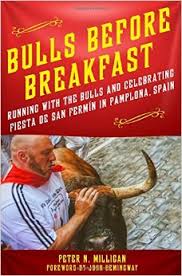 Though I still have no desire to actually run with the bulls, due to my unfortunate propensity for clumsiness, 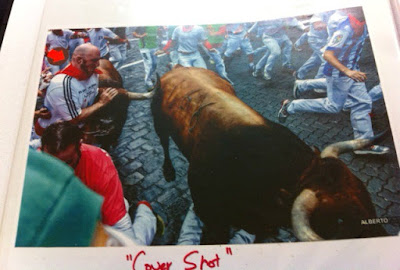 I was quite taken with Pamplona, its people, and most importantly, its food. There were a few times while reading about the juicy steaks, tapas, and the peppers that you have to try, that I decided someone should invent a book with an edible cover and pages.
I also have a fascination with sub-cultures, and loved learning about the bull runners and the culture that surrounds the fiestas of San Fermin.

I thought that Bulls Before Breakfast was a great travel book, so I was very excited when I saw that Peter was on the schedule to speak to The South Jersey Writers' Group. 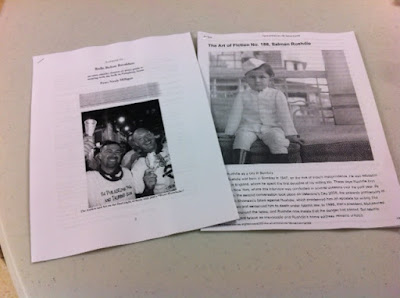 Peter’s talk was a nice blend of writing advice and travel inspiration. He shared his four rules of travel. 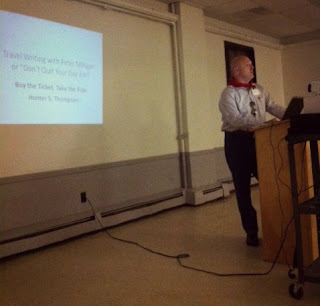 Peter then shared his journey to getting published. He reminded the group of something we hear a lot, but need the constant reminder of, be persistent. Don’t get discouraged. Don’t give up. Peter did not give up.

First write something, and then get it out there. Keep sending out submissions, even when you have reached the Rs in the Writer’s Market book. Peter reached the Rs, though his agent came from the F submissions.

Next, once you secure an agent, publisher, editor, etc… be ready for some “intelligent compromise.” This was an excellent term for an excellent piece of advice. You can hold your ground on some things, but you should choose your battles, especially when it comes to ticking off sports broadcasting celebrities or excessively inebriated actresses.

Peter also shared some of the unexpected things that can come from finally having your book out there, like jealousy from friends, demands for handouts (aka-why don’t you just give me a free copy of your book), and even death threats.

Everyone learned the term for what many of us already do, book "fluffing." This refers to the act of helpfully reorganizing a shelf at a book store so that either ones' own book, or a favorite book, is turned out, cover forward. This will increase the likelihood that a passerby will be enticed to take the book home.

Peter’s talk was brilliant. It was fun, entertaining, and highly informative. I think everyone left with a nice shot in the arm of writing motivation, and a nice dose of travel motivation too.

I wish Peter a good run at this year’s San Fermin Festival, and I, as well as many other South Jersey Writers' Group members, look forward to reading his next book, even though I disagree with the publishers, I would not tire of all of the “Ari stuff.” 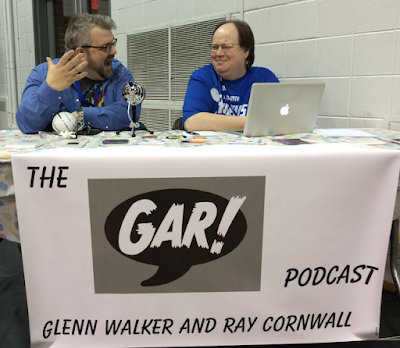 Recently here on the blog we talked about The GAR! Podcast recording live at the 2016 Camden Comic Con, and interviewing several members of the South Jersey Writers' Group. You can read about that here (or here), and hear the episode here.

My podcast partner Ray Cornwall and I have recorded live at the Camden Comic Con all three years it has existed, and South Jersey Writers' Group members Amy Hollinger and Robert Repici have each been on the show before, but never at the same time. This year's convention gave them both a chance to join us together for an hour of fun, which we have called The GAR! Podcast speed round, as we hit as many topics as we possibly coul as we chatted and watched the convention around us. 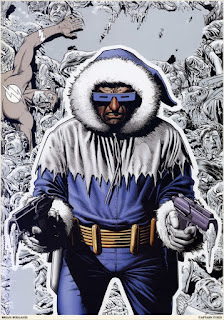 Among the subjects discussed were Amy's wrestling questions, the Undertaker, Mario Bros. on TV, Aaron Paul, Ray's Hulu obsession, Philip K. Dick, the Ultimate Warrior, cosplayers, so many Spider-Men, "Mister Rogers" and "Sesame Street," the world of L. Frank Baum's Oz, the dark side of "Hoarders," name ownership, famous last words, the racism and sexism of "Night Court," and the deconstruction of Captain Cold. Yeah, it's that kind of show.

Amy has been enjoying her retirement as President of the SJWG, and Robert actually ran a creative workshop at the convention, which they also discuss. For our coverage of the last two years at the Camden Comic Con, click here.

Posted by SJWriters at 1:00 PM No comments:

No Place to Pray by James Carpenter 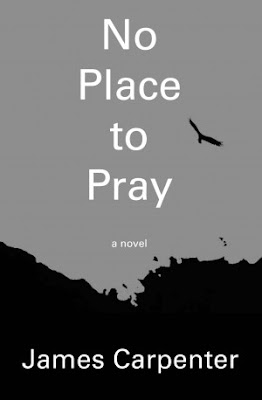 Two young men, one bi-racial and the other white, meet in an overnight lockup and begin their shared twenty-year downward spiral into alcoholism and homelessness. LeRoy and Harmon work together, drink together, brawl together, and as Harmon suffers from his final illness, they both bed Edna, a wealthy widow who, out of pity, curiosity, and loneliness, takes them into her vacation home by the river.

Through episodes rendered from shifting, multiple points of view, a series of flashbacks, and LeRoy’s adventure stories - this very smart but uneducated man’s attempts at fantasy writing - we learn of the people and tragedies that shaped their lives and those whose lives unravel along with theirs at the seams of race, class, and religion, and where no one ever quite tells the truth.

South Jersey Writers' Group member and author James Carpenter can be found on Twitter, and you can pre-order the book No Place to Play here.

The Writers Coffeehouse for April 2016 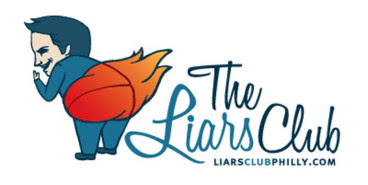 Examples of distinct voice done well can be found in J.K. Rowling’s books. The very different voices of the alternating main characters in All American Boys by Jason Reynolds and Brendan Kiely, ring distinct in the book’s characters with their similar backgrounds, living in the same place. “Be true to your character,” said Janice. Make sure the similar persons you design are individuals so the reader can easily tell them apart. 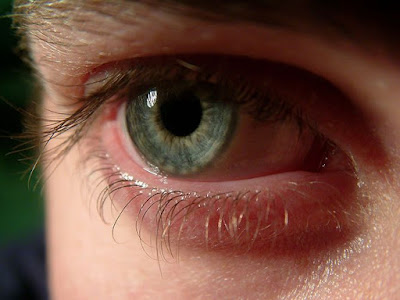 Jon spoke of economy in writing. The voice of a character should show the story, so exposition isn’t needed. You don’t want to undermine your character by violating their POV. If you need something explained in your story, let the character bring up the information needed and address it through his/her dialogue or internal thoughts in a way that’s natural and fluid.

Be conscious of how often you switch POV. Color-coding your manuscript is a technique that can identify where each POV character is in the story and how often you’re in that view. The different POV will pop off the page so you can see if there’s a balance. Scrivener and other software work well for this, but so do Post-it notes and 3x5 cards. Outlining helps in establishing your characters. You should understand your characters a bit before writing the outline, but you can find out more about them as you build the outline. Janice, while outlining, sometimes comes up with dialogue for her characters. She stops outlining and writes the dialogue down as it comes to her. A gift! For her last book, it took three months to create her outline, but she did less editing after the story was written.

Having an outline saves time when an editor or agent asks for changes. It also prevents bad surprises for the author by keeping information consistent and easy to check. Make sure when you do those changes that you also reflect them in the outline for later reference. If you’re creating a series, having a record of the completed books in an outline or other form, makes it easier to keep information throughout the series uniform. 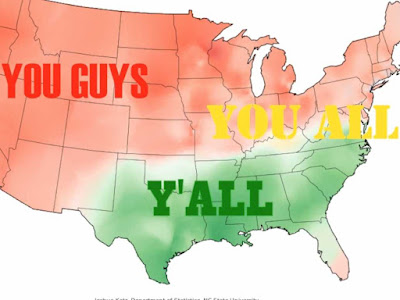 But Janice and Jon agreed: “Do whatever works for you.” Steven James swears in Story Trumps Structure that one shouldn’t outline. Biographical character sketches should contain deep stuff about characters beyond their physical form and what they like to eat. Interviewing them can enable you to find their voice. For each character, you should know their unique POV, even if you’re not writing in their POV. Whatever happened in the character’s life before the story will show in their dialogue and actions. Even birth order is important with family characters.

A question about dialect came up. Suggestions: Find a few words to repeat to relay a character’s dialect, but go light with it. Alternate spelling doesn’t look good on the page, it bogs down the writing and tires the reader. The cadence of words spoken in English by a non-fluent character displays their background to readers. But don’t stereotype your people. There’s a fine line with this, so be sparing with colloquialisms and dialects. When sprinkling in non-English words, they shouldn’t need translation because of context. 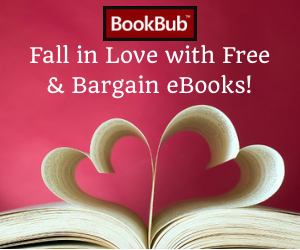 Keith Strunk joined the meeting as Jon shared information about BookBub. “It’s huge. Seems to be a powerful tool,” said Jon. An email marketing tool for ebooks, BookBub works on price reduction to stimulate sales. Its thriller list alone has 2.5 million addresses. Similar services, like The Fussy Librarian, are smaller than BookBub, which averages 26,000 downloads. So for the prorated cost of their book, some authors have had success. But for ebooks priced at 99 cents, Jon suggested we consider what percentage of their buyers will purchase another book by that author priced above 99 cents. Harlan Ellison believes you should never give your stuff away. That may be what authors who go the 99 cents route with BookBub are doing in hopes of other sales.

MSWL Manuscript Wish List is a 12-hour pitch on Twitter to literary agents. Authors put up a tweet to see who likes their pitch. Agents who are looking to represent an author may request pages of a manuscript. How important, really, are business cards? “Networking is about touch. Lots and lots of touch. And that’s what business cards are,” Keith answered. A card is a memory, so you are “marketing memory” with your picture on the card. It’s about interaction with people, and a card can create a connection. But, “Networking is always a long term thing.” 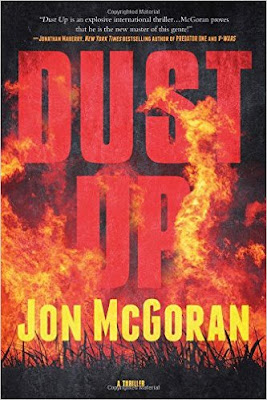 There will be no Coffeehouse in May, although it resumes June 26th, noon to 2 PM with an additional hour for networking. Thanks for setting up this SJWG road trip, Sir Glenn Walker. Thank you Gail Priest for driving. The Liars are great, and so are you.